The Fashion Sense of Toddlers

Professor X turned 22 months yesterday, on the 22nd. His last magic birthday until he is 22. At which time he will be taller than me, and possibly his father (but probably not his brother) and graduating college. The time will go too fast. Heaven only knows what he will be wearing then – if I knew what the fashions of 2035 would be, I could be a billionaire.

For now, though, he has developed his first fashion sense. Unlike when he is 22, his toddler self isn’t thinking about how cool he looks, or how to get a date with the cute boy or girl across the way, or impressing a future boss. No – his toddler self has two clothing loves – Vehicles and Dinos. And this outfit is a riotous combination of both. 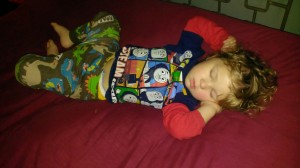 Every day that isn’t a day where he gets to wear either Thomas or Lightning McQueen on his shirt is a sad day. And every night should be a night where dinosaurs roam the earth once more, at least as long as they are attached to him via his jammies.

It is both delightful and poignant that his personality is developing so quickly. I wouldn’t trade it for the anything, but he is past babyhood, running through toddlerhood, and will soon be a young man. And when he is 22, and moving off on his own, dressed in some natty shirt and the latest trend in jeans, I will undoubtedly shed a tear that a train on his shirt and dinos on his pants no longer fill him with the utmost joy and happiness.

2 responses to “The Fashion Sense of Toddlers”